Emergency lighting is an important feature for every building and business.  When a power outage or catastrophic event happens, emergency lights show the way for a safe exit.  Emergency lights are permanently mounted, battery operated lights, which are tied into the building’s power grid. They draw power from the grid to maintain a fully charged battery. In the event of a power loss, the light automatically turns on, providing enough light for people to leave the facility.  There are different types of emergency lighting that vary in their power and lighting sources.

Maintained emergency lights are on all the time.  They are usually found where large groups of people are gathered.  The lighting is designed to continue to work even when there is a power outage, preventing total darkness.  It can be used as standard lighting as well but switches to battery power when the electricity goes off.  It is commonly found in auditoriums, movie theaters, hospitals, airplanes and shopping malls.

Non-maintained lighting only comes on in the event of a power failure as an emergency light source.  It is usually battery-operated and regularly charges itself through its own power supply to guarantee that it will activate when the power goes out.

The emergency light is separate from the central point for its power source.  This minimizes any possibility of emergency light failure because it is only used in emergencies for maintained lights.

Both maintained and non-maintained emergency lighting require regular testing to ensure the safety of the occupants in the event of an emergency.  The lights are required to stay on for a least an hour. 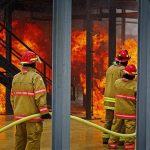 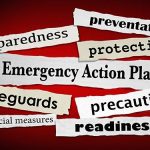